We work on a range of different topics, currently mainly focusing on mechanisms and properties of unconventional and topological superconductors.  We use a wide range of theoretical techniques, from analytically tractable Green’s function methods to large-scale numerical calculations of inhomogeneous superconducting systems and strongly correlated materials, also including complementary ab-initio calculations. Below are shorter descriptions of our currently funded main activities.

This activity aims to theoretically discover and characterize entirely new quantum states of matter by novel combinations of global topology and local superconducting order. The discovery of a vast amount of different topological states of matter has completely revolutionized physics the last ten years. The defining property of topological matter is the global non-trivial topology of the electronic structure. This is fundamentally different from the traditional way of classifying matter, where local order parameters instead are the key concept, such as the magnetization in a magnet. In topological superconductors these two disparate views of matter naturally merge, as they have both a global non-trivial topology and a local (superconducting) order. 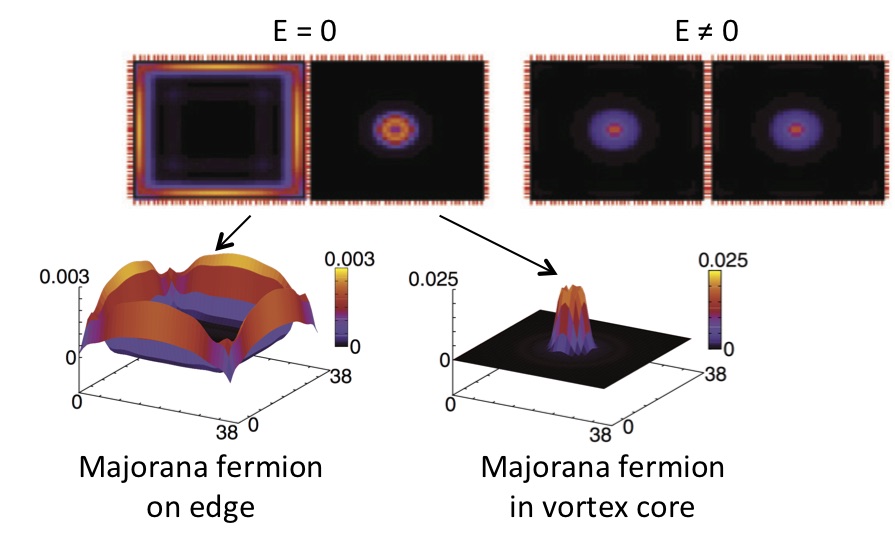 Single electronic state at zero energy divided up into two spatially separated Majorana fermions: one at the edge of the sample and one in a superconducting vortex core. States at non-zero energy are not spatially split and form regular electronic levels. Adapted from Björnson and Black-Schaffer, Phys. Rev. B 88, 024501 (2013).

We are pursuing several systematic approaches to find new topological superconductors, using different but interlinked concepts. These range from focusing on using complex but still common normal-state electronic structures, such as flat energy dispersions and multiorbital configurations, to exploring how time-reversal symmetry can be spontaneously broken in known superconductors and thus generate non-trivial topology. We are also using nanostructuring to achieve both novel phases and sculpture artificial boundaries in topological matter.

This activity is funded by the Wallenberg Academy Fellows program and the Swedish Research Council (VR). 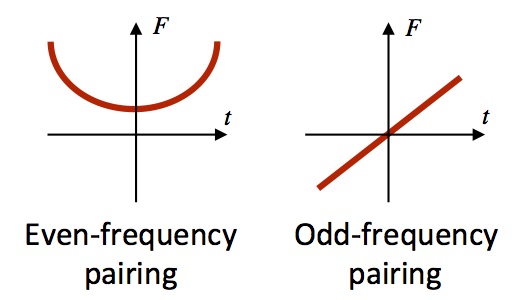 The goal in this activity is to significantly expand the concept and importance of odd-frequency superconductivity to a very wide class of materials, ranging from multiband, bilayer, and nanoscale superconductors to topological and Weyl superconductors. One example is the chiral and multiband superconductor Sr2RuO4 as illustrated in the figure below. We also aim to establish the connection between topology and odd-frequency pairing, which needs to be addressed in order to understand topological superconductors, as well as incorporate new materials and functionality into traditional SF structures.

This activity is funded by the European Research Council (ERC).

Chiral p+ip superconductivity in Sr2RuO4 divided into intraorbital contributions within the three low-energy orbitals and even- and odd-frequency interorbital pairing. Adapted from Komendova and Black-Schaffer, Phys. Rev. Lett. 119, 087001 (2017).

Quantum dynamics as a material design principle is an emerging paradigm in condensed matter physics. The answers to basic questions about the nature of the orders, dynamics, coherence, and dissipation of dynamic quantum matter are still unknown. In this activity, we aim at addressing some of the most basic questions about dynamic quantum matter: the nature of the orders in the time domain of quantum mechanics, the emergence of entangled orders, and the role of dissipation on quantum orders.

Our goal is to predict, engineer, and probe non-equilibrium phases that have no equilibrium analogue.  To accomplish these goals, we investigate external drivers that stabilize existing states by enhancing their robustness against noise and ultimately also investigate the non-equilibrium states that do not have analogues in equilibrium, as well as study energy dissipation and localization that play fundamental roles in limiting and enabling non-equilibrium states. Through a collaborative effort we aim at developing new theoretical models and methods able to understand and accurately predict the creation and control of novel dynamical quantum states of matter. Our theoretical efforts are supplemented by key experimental measurements using ultrafast, coherent photon probes with energies from the meV (terahertz) to the keV (x-rays) range.

This activity is a joint theory-experiment project together with the research groups of Alexander Balatsky (Nordita), Jens Bardarson (KTH), Emil Bergholtz and Stefano Bonetti (Stockholm) funded by the Knut and Alice Wallenberg Foundation.